The first postcard shows a mountain range, a picture captured on a clear day. A few wispy clouds drift by, but the landscape is still bright in the sun. When they’d hiked those mountains together, it had been thirty-five degrees, raining. Their sneakers had slipped on leaves, brown and red and yellow and blanketing the trail. They’d reached the summit covered in mud and laughing so hard their stomachs had ached.

John lies in his bunk and stares at the familiar scrawl. It’s a comfort, after a day spent in a torrent of enemy fire. 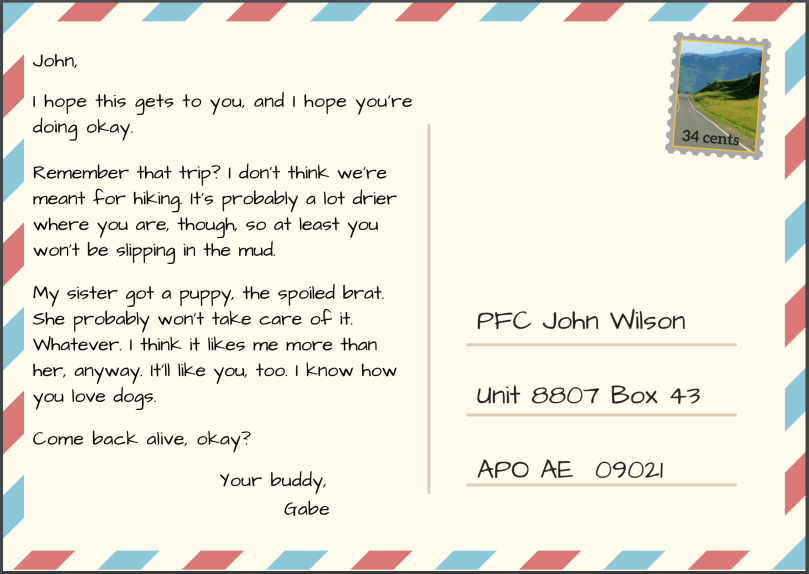 John closes his eyes and thanks Gabriel for writing about simple, happy things.

On the second postcard, fireworks explode in blues, yellows, whites, reds, reflected in the ripples of the lake below. Every July 4th, John and Gabriel had sprawled in the sand and watched those fireworks, just the two of them, side by side, elbows brushing. Sometimes, instead of watching the fireworks, John had watched the way each burst shone in Gabriel’s light, light blue eyes. Sometimes, Gabriel had caught him watching, and snorted out a laugh.

John reads the card late on the evening of July 3rd. He hears an explosion in the distance.

The postage stamp is an American flag. John vows to call Gabriel a dork when they finally see each other again.

John receives dozens of postcards. Toward Thanksgiving, Gabe sends an image of the Paul Revere house in Boston, where they’d taken a school field trip their junior year. It was the closest John had ever been to the ocean, before he’d been shipped overseas.

Near Christmas comes a picture of the frozen lake where they’d skated together many times over the years. John stares at the ice and the snow and tries to imagine it’s cold where he is.

Even when he remembers nothing else, John remembers the postcards.

He lives in a white room, with a bed and a chair and a table and not much else, and sometimes he forgets the time, and the day, and even his own name – but never the postcards.

On days he forgets, a kind woman with a soft smile and a softer voice hands him a box. Inside are the postcards – worn, smudged, stained. John lifts the cards from the box, one by one, with fingers that don’t feel like his own attached to hands that must be someone else’s. Through snapshots and friendly, nostalgic messages written in a scrawl that might have been familiar a very long time ago, John tries to reconstruct the life he’s forgotten.

Sometimes, a man sits across from him, and they sort through the postcards together.

“Do you remember this one, John?” the man might say. “Do you remember? It was Valentine’s Day, and we were both single, so I bought you flowers and you bought me chocolates and we went to these botanical gardens.” He taps the picture and snorts out a laugh. “Pretty romantic, if you ask me.”

John fights the urge to call him a dork, because it would be rude to call a complete stranger a dork.

Sometimes, clarity returns in tiny jolts, and John notices how tired the man looks. His face is distorted, blurry, as most faces are, but the tiredness is in the slope of his shoulders and the curve of his spine, in his gait when he walks and his voice when he speaks. When the man is tired, he says strange, sad things.

“Just keep trying. For me.”

“You’re off somewhere else, blocking it all out, and you don’t remember me, or anything, and you probably don’t even remember yourself, sometimes.”

It comforts John to know, even if he knows nothing else, that there is someone who won’t give up on him. On bad days – on the worst days – John feels like giving up on himself, whoever he is.

There are good days, too, when the sun is bright outside and John’s fingers and hands are his own, and the man sits beside him and they don’t even have to go through the postcards for John to remember. He remembers leaves and flowers and ice and the salty smell of the ocean. On the best days, John looks up into light, light blue eyes, and sees fireworks.

One thought on “What John Remembers”